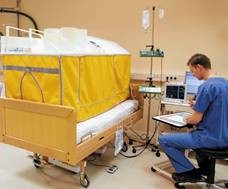 Borrelia is a genus of spirochaetes and are thermosensitive.
That opens up a new effective therapeutic option for chronic Lyme disease in the tradition of Wagner-Jaueregg who developed in the pre-antibiotic age, the so-called Malaria therapy to treat progressed Syphilis (also caused by spirochaetes) by deliberate infection with Malaria provoking the concomitant fever attacks. For this treatment approach he received the Nobel Prize in Medicine in 1927.

In 1996 Reisinger et al. show an extraordinary increase of efficacy of antibiotics against Borrelia Burgdorferi under elevated temperatures.
For more than 15 years St. George Hospital has been developing the method of "Antibiotika Augmented Thermoeradication“ (AAT) - based on unexpected ameliorations in patients assumed to suffer from Lyme Disease additionally to the cancer disease that was originally being treated.

Extreme whole-body hyperthermia using heckel-HT3000 up to approximately 41.6°C is directly combined with the antibiotic Ceftriaxon, β-Lactam, and Metronidazol.
Treatment results of 809 patients of the past 3 years showed a very good - good clinical outcome in approximately three-quarters of the patients, measured by a reduction of Burroscano-Score of at least 50%.
Even heckel company has recently been receiving several emails and phone calls from thankful patients from USA, whose often long lasting suffering has ended or has significangtly improved.

Clinica Holistica Engiadina is the world's first specialist burnout clinic to use heckel whole-body hyperthermia in routine clinical practice for the treatment of depression.

wIRA-heating of piglet skin and subcutis in vivo: proof of accordance with ESHO criteria for superficial hyperthermia

We use cookies on our website. Some of them are essential for the operation of the site, while others help us to improve this site and the user experience (tracking cookies). You can decide for yourself whether you want to allow cookies or not. Please note that if you reject them, you may not be able to use all the functionalities of the site.